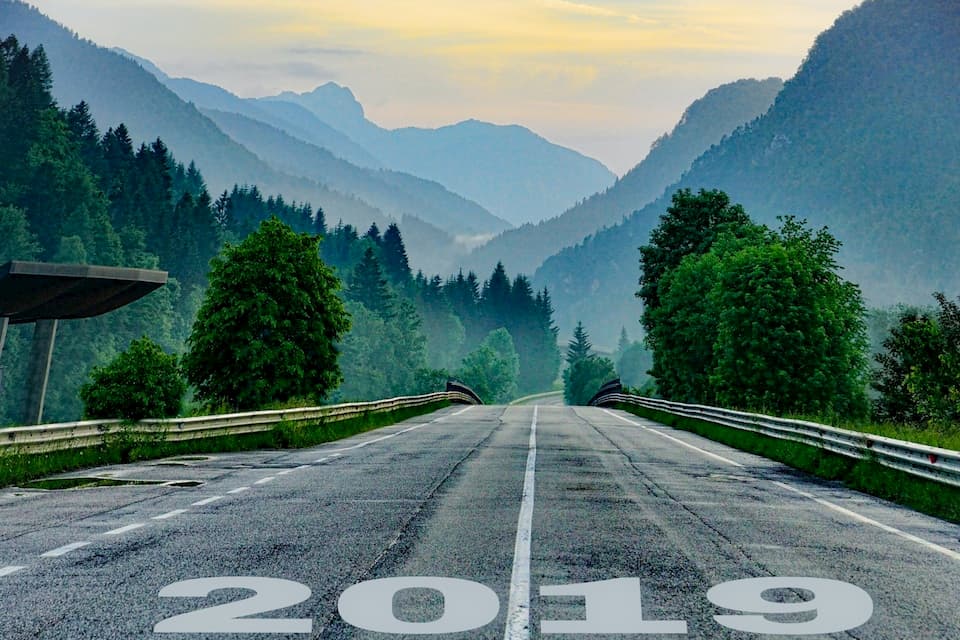 It has been a year of an interesting sentimental journey for investors. Mood swings in financial markets were a clear representation of it. After the downturn at the end of 2018, followed by a sharp move higher at the beginning of 2019, investors started piling into the safety of treasuries, driving yields down. The yields started their recovery after summer. This was not the only sign that sentiment had improved with the arrival of fall. Copper prices went up, the yen went down compared to the Australian dollar, American stocks reached new peaks (with strikingly better performance of cyclical stocks relative to defensive ones), European financial stocks outperformed stocks of European consumer staples, some emerging currencies started to rise relative to the dollar… Investors clearly embraced riskier assets in the second part of the year.

The S&P 500 was up 31.49% last year. Nasdaq 100, the tech heavy index, beat it with an increase of 38.99%. MSCI World index and MSCI Emerging Markets index followed them with 27.67% and 18.42% respectably. Even credit performed very well with Bloomberg Barclays US Aggregate index finishing the year with 8.72%.

However, it wasn’t all due to the investor’s sentiment. Record highs don’t tell the whole story. As I told many of you during the year, much of the returns this year were recapturing losses from the fourth quarter of 2018. More importantly, low interest rates and easy monetary policy of the powerful central banks helped stimulate the asset prices across the board. The goal of the central banks was not to increase the asset prices, but to improve the growth in the real economy, which did not succeed for most of the year. Towards the end of 2019, we started seeing some signs of growth improving globally.

Feasting on easy money was only disrupted from time to time with the negative news (or guesses) about the future trade agreement between the US and China. Emerging markets were held back due to the trade wars until the positive announcements at the end of the year, which allowed the EM assets to jump ahead of other markets.

With uncertainty of trade wars remaining one of the biggest issues, slow global growth, electoral politics dividing our government and society, and further infectious spreading of instability across the Middle East and Western Asia possible, we still believe that there is more upside to be had. On average, a recession typically doesn’t start until around twenty months after the yield curve inversion. Even better, 2019 inversion was mostly due to the large demand for US Treasuries from foreign investors running away from the negative rates in their markets. So, equity and credit markets have more time to benefit from improvement in the economic data and corporate profits. What we will be looking for in 2020 (and hopefully our vision will be 2020) is improvement in corporate profits coming from increases in productivity and a healthy consumer, rather than from tax breaks, share buy-backs, and artificial stimulus from central banks and government spending which are likely unsustainable.

Rather than rewriting the whole story of the “super cycle” we have been following and writing about for quite a few years now, please refer to our 2017 and 2018 Rear View letters which are posted on our new website to connect the whole story. While there, please take some time to explore the website upgrades we worked on for the last year.

Geo-political risks are almost too many to account for. Trade wars can have substantial costs to the economy. Realignment of the world’s power balance is continuing as discussed before. We expect that the establishment of the new trade routes and supply chains will be slow. We are looking forward to expected framework of the US-China trade deal as we understand the importance of this relationship will be tested more in the future. Middle East instability is related to the global economy most significantly through the stability of oil supply and price. Chevron, (one of the worst performers in the S&P 500 in 2019) for example makes $450 million more in cashflow for each $1 increase in oil price. Project that on large economies dependent on oil and you might find who benefits from controlled chaos in the world’s primary reserve area. Sunni-Shia divide is now clear with their allies confirming their sides. The process of redivision of that part of the world should continue for a while still. Further, Brexit is not over yet. The end-of-the-year election gave a clear mandate to the new PM to leave the EU, but there are a lot of issues needing to be resolved, while some loss in growth is expected and has already been priced into the markets. The main question now is, will the British leaving make the remaining EU countries closer and improve their economy, or will it further fracture the old continent and make us all less safe both economically and politically. North Korea doesn’t like not being at the top of the news for long, so we expect we will be hearing of more actions testing world’s patience and reminding us of a power still not linked to the agreed world order. Australia’s fires most likely will bring downward adjustments in the expected economic output on top of the losses in assets and wildlife. On the positive side, the African continent continues to grow the consumer strength connecting further to the global infrastructure, internet, education, and manufacturing networks. Technology makes these steps faster than ever.

The US economy is becoming a slow-growing, stable economy describable with a 2+2+2 formula (percentages of GDP, inflation, and 10yr treasury interest rate). This is not necessarily bad for us as investors. However, there is a need for a long-term increase in productivity continuum due to a low growth of population (or slowed growth of immigration). Education is the key. We can not lose the inflow of the best minds the world has to offer. Data tells us that the number of Asian students’ coming to US has been reduced in the last year. Long-term, without population growth, we see a disappearing consumer (US consumer is still the strongest, but Chinese has surpassed us this year in retail sales not damaged by trade disputes. Build in China – sell in China started working well). Risk of recession has increased in the minds of CEOs and CFOs of domestic companies. However, we do not believe we will see it this year, but if it happens it will be the supply side that causes it (rare but happened before with Oil crisis), rather than caused by a loss of demand. Mistrust in the global trade might make some products too expensive, or not easily replaceable. The Fed is not expected to make further large cuts in interest rates, but they are communicating that they will be ready to react if the economy needs help with an array of other tools when needed. The pressure on all powerful tech companies should continue regardless of the party in power. The balance of the amount of power and benefits to society are being measured and there is enough of a push on politicians to find a way to the right balance. Any regulation coming on this issue should definitely impact the prices of not only those stock companies, but the whole indexes as well.

The global economy is in recovery if not disrupted by war. The World Bank and the IMF are forecasting 2.7% and 3.4% World GDP for 2020 respectively. With a stable dollar, potential for the performance of international assets is increased. We believe Europe is a safer bet, but large performance is possible from emerging equities relying on a substantially higher long-term GDP expected in emerging markets and China. Global demand for US-dollar denominated assets should still continue this year. The strength of the US dollar is stabilizing even with the easy policy continuing in Europe and Asia. Potentially, treasuries will still be a good diversification for the growth accounts. Even though we have seen signs of demand for the dollar softening since October, due to slowing easing in other parts of the world and investors starting to recognize that non-US assets present value as opposed to a continued run to safe US (higher yielding) bonds and tech stocks, we believe that the predictions of “tables turning” is wrong. Yes, some stabilizing of dollar price is welcomed here, however, foreign assets should still continue demanding dollar denominated home even in 2020.

Election year is here! Get ready for all kinds of news in the daily cycle. Markets are pretty good at discounting a lot of the election stuff, but don’t exclude volatility coming from changes in the polls guessing which candidate looks better at that time. Historically, election years were good years for investors as there is some increased clarity of the actual policy on both sides of the political spectrum which is what investors are looking for.

Culov Wealth Management would like to thank all of you for your continued trust, and we look forward to growing with you as your trusted Advisor. As always, we will continue to raise the bar on the service we offer to the families we serve and will continue to improve and streamline our processes where we can. That being said, we would like to introduce our new website that has now gone live after months of work and deliberation with our board members. Please take a few moments to explore the new features and content that we added and feel free to respond with any comments. We would also like to share that we’ve received approvals from the City of Buffalo to complete the final renovations to the exterior of our home starting Spring 2020 and we are very excited for everyone to see when you come for your meeting this year.

Wells Fargo Advisors Financial Network did not assist in the preparation of this report, and its accuracy and completeness are not guaranteed. The opinions expressed in this report are those of the author(s) and are not necessarily those of Wells Fargo Advisors Financial Network or its affiliates. The material has been prepared or is distributed solely for information purposes and is not a solicitation or an offer to buy any security or instrument or to participate in any trading strategy.

Investment and Insurance Products are:

This information is intended for use only by residents of (AZ, CA, FL, GA, MA, MD, NC, NH, NJ, NV, NY, OH, PA, TN, TX, VA, WI, WV). Securities-related services may not be provided to individuals residing in any state not listed above. Please consult with the FA as s/he may not be registered in all states.

Insurance products are offered through nonbank insurance agency affiliates of Wells Fargo & Company and are underwritten by unaffiliated insurance companies.

A note about Social Media: Opinions, comments and actions taken on Social Media are those of the third party and do not necessarily reflect the views of the creator of this profile or of the firm. Social Media is intended for U.S. residents only and subject to the following terms: wellsfargoadvisors.com/social.

Important notice: You are leaving the Wells Fargo website